Puerto Vallarta, Mexico - This year there are unusually large numbers of whales in the Bahía de Banderas. They come here on their annual migration, but the number of humpback whales visiting Mexico's Pacific Treasure in 2012 is allowing for a remarkable number of sightings. Here is the story of one of Vallarta's whale "hunting" trips:
Greg used his hand to shade his eyes from the sun as he traveled along at an incredibly high speed on this fine boat. The crew had stated that the boat could reach speeds of about 50 nautical miles per hour, and it probably was, but there was a bird that was not only following us, but even passed us to then dive in the ocean to catch a fish.
Initially, Greg thought that it might be a gull, but its sharp and upright beak and its feathers with a pattern of white and gray fading to the neck, as well as the color of its feet indicated that it was something else. "It's a Blue-Footed Bobbie," explained the leader of the expedition.
Greg thought about this peculiar name and smiled, and apparently someone else in the group was thinking the same thing: "There's always luck when you have a pair of boobies by your side," someone said. This is when I realized that not only Mexicans know how to make plays on words.
However, we had not driven here because of these bobbies, even though they are extremely rare. They can only be found in the Galapagos Islands and in a narrow strip of the Mexican Pacific; precisely where we were at the time. We were headed towards Las Marietas, a group of islets that lay right next to this exclusive area in Punta de Mita, in Riviera Nayarit. These islets have been chosen as nesting grounds by thousands of birds, including scores of blue and yellow-footed bobbies.
We came to this place because we were "hunting" humpback whales. We took aim at them first with our eyes, and then with our telephoto lens. We were enjoying a fruitful trip when the guide told us that in this area we could possibly find mothers with their cubs. 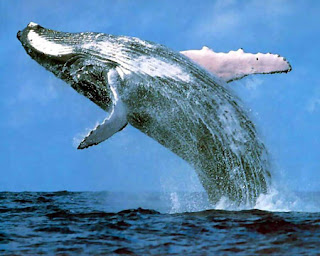 The scenery was beautiful and we knew that the chance of seeing a family of humpbacks was high. Throughout the trip we'd already seen about 15 adults, some over 16 meters in length. Most had jumped in the distance, but some had surprised us by blowing up water through their characteristic blowholes, and by raising their beautiful and huge tails just before diving and disappearing again.
This year there are many whales in Bahía de Banderas, we can certainly attest to that. We had already seen 15 and we still had some part of the tour left. They're feeding on sardines. This is very unusual since in the previous months they'd been gorging on krill and herring (up to a half ton a day) off the coast of California, Oregon, Washington and British Columbia, just in order to endure the journey to this region, where they spend the winter mating and breeding.
"In the 15 years that I've been working with humpback whales, I'd never seen whales feed here. Someone once reported seeing a whale feeding in the area, but it was purely speculation. Normally whales pass schools of sardines without showing any interest, but this winter we've been surprised to see them feeding extensively on them," declared Astrid Frisch, a specialist in this species who works for a local newspaper.
I was wondering if that was the reason why our whale "hunting" was so successful. I found out the answer when later a biologist explained to me that, in order to find food, whales work in large groups of up to 30, using drag and cornering techniques to catch fish. I also understood that the reason we saw so many jumps and dives is because these are a form of courtship for the whales.
We got one last surprise when the boat turned to port in order to go around the "long" island, and proceeded to go between it and the "round" island (this is how locals identify the largest islands in Las Marietas.) Suddenly, three whales broke the surface; a mother, its calf, and a male escort.
We were ecstatic! The calf, which apparently was just over one month old, seemed to read our minds. It must have known we were in the mood for a show before heading back, since it made a first and a second leap, then a third one while turning in the air, and then yet another one while diving backwards. Apparently it was thrilled to see us too! The experience was so great it made us want to jump into the water with the calf, but unfortunately, it was time to go back. As we headed the boat towards shore I thought, "What a great end to a perfect day." 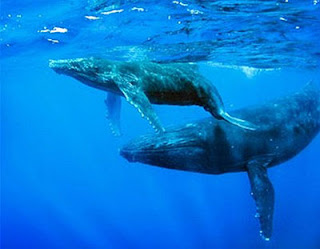