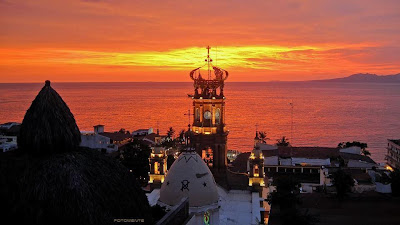 New York June 5, 2013 – Tripadvisor’s consumer base of more than 2 million monthly users has voted Puerto Vallarta as the #4 overall best Mexican destination for the 2013 Traveler’s Choice Awards.
While occupying 40 miles of diverse terrain, Puerto Vallarta’s attractions can range from water and adventures sports to the longest zip-line in Mexico. At the city’s heart lies the old town with its iconic cathedral, main square and seaside promenade, which comes alive nightly with live musical and artistic performances. Puerto Vallarta also hosts over 30 art galleries displaying works by local, national and international artists.

The Traveler’s Choice Awards are of great significance because they are given to destinations, hotels and restaurants as a result of maintaining at least a 4-star average score from consumers during 12 months.

Puerto Vallarta’s is one of the most acclaimed in Mexico and constantly receives accolades from media and visitors alike. Most recently Puerto Vallarta was named best Mexican Destination by the readers of Tripadvisor.com; in 2012 it was named “Most Romantic Place in Mexico 2012” as well as “Favorite Beach Destination 2012” by users of the site About.com and “Luxury Beach Retirement on a Budget” by International Living. In 2011, Puerto Vallarta won the title of "Friendliest City in the World", as chosen by readers of the prestigious magazine Condé Nast Traveler. In 2010, Vallarta was named "Best Place to Retire in the World" by the AARP  (American Association of Retired Persons). This year the city was named "Best Retirement Destination in Mexico" by USNews.com and one of the Top Cities in Latin America by Travel + Leisure Magazine.


Additional information on Puerto Vallarta is available at www.visitpuertovallarta.com